All my life I’ve dabbled in art. As a kid I copied and drew cartoon characters and did all types of craft projects. In my teenage years, I began drawing the faces of the my favorite teen idols.

After college, for fun, I took a variety of art classes at community colleges in Los Angeles and Florida. While I learned something from each of them, I felt like an artist without a subject. I could create art if I wanted to but I had yet to find anything that truly captured my heart.

For most of my adult life, I worked as a computer programmer, then software engineer [California]], and then a web “goddess” analyst [Florida] to web “angel” developer [Oregon]. In other words, I became a computer geek, very left brain. It came easily to me and it was fun and challenging to do.

In early fall of 1998 I won a facial at a silent auction. I rarely win things. During my facial, as Jillian poked, prodded, washed, massaged and did other such things to my face, she mentioned that she also does Reiki. “What’s that?”, I asked. “Consider it an energy massage for your body but without me actually touching your physical body,” she said.

Intrigued by this, I made an appointment for my first ever Reiki session. At the very least I found it relaxing and soothing, with great ambiance and soft mood music. Jillian ‘massaged’ me for almost an hour. When done and without letting me off the table, she looked me straight in the eye and firmly told me, “You’re not to go home! You’re to go straight to the bookstore and buy a coloring book and some crayons! You’re not using your creative side of the brain.”

It so stunned me, that I did just as she said. I bought a Crayola 64 crayon set and a couple of Animaniacs coloring books. I began to color.

I quickly found that the crayons were limiting…it was difficult to color in any details. I upgraded to a cheap set of color pencils, which gave me limited results. I then bought a much better set of pencils. Now, we’re talking.

I soon became bored with the coloring books. I loved the Animanics but I felt like I needed something more challenging. As ‘luck’ would have it, I came upon a new age book store in Florida where I found and bought a mandala coloring book. This was the first time I had ever heard of mandalas. Now this was something I could really enjoy coloring. My heart leaped with joy! I loved the geometric patterns and playing with colors.

To my amazement, though, I became bored with these mandalas. I then came to the realization that I needed to create my own mandalas. Around this time, we embarked on a journey to Egypt. I instinctively knew that going there would be the trigger, the spark, the “happening” that would allow me to start creating my own mandala designs.

In early 1999, my husband, Gerry, and I traveled to Egypt. I thought that I would only be interested in seeing the pyramids, the sphinx and the hieroglyphic drawings. As it turned out, it was everything! I became completely mesmerized and enamored with all the Middle Eastern geometric patterns found in the mosques, Coptic churches and the markets, as well as the Egyptian symbols and hieroglyphs found on temple columns, walls, ceilings, tombs, and in view practically everywhere we went.

In Egypt, I found my art and my heart. I am now an artist with a subject! I drew my first mandala while going up the Nile on our ‘cruise’ ship. Every time we sailed during daylight hours, I situated myself front and center on the top level outside deck of the ship. I felt like royalty with a commanding view of both shores of the Nile, and the river up ahead. At times I felt like I traveled back 3,000 years. Along the shore, people worked the fields in traditional garb, hauling their crops on their heads and on donkeys and camels.

Upon our return home and through most of 1999 I drew out mandala after mandala. In early 2000, we moved to Oregon where a friend introduced me to the concept of “coning” and “soil-less gardens” via the work of Machaelle Small Wright at Perelandra. In a nutshell…it’s about treating every project as if a garden and to connect with its related nature spirits as a way to co-create that garden turning it into an active meditation process for me. With the addition of the coning process, they took on a whole new life, a whole new higher vibration of energy.

Soon after, I realized that for each symmetrical mandala, a message of inspiration wanted to be expressed with that mandala. In 2002, to my amazement, I began hearing this Other Voice in my head, a voice of Pure Guidance.

One day while coloring my  “Authentic Self” mandala, I thought “what if people don’t like the colors I’m using?” This Other Voice said, “Let them color their own.” Wow! What a brilliant idea! That’s when I became fully aware of my Committee (Team R.H.O.N.D.A. of which they tell me I am a member). And that’s when I started creating my mandala coloring books.

In 2004 a new Idea made it to the surface of my consciousness: do readings for people and create a mandala as part of the process. This idea challenged everything I knew about myself and what I thought was even possible for me. In late 2010 I fully embraced this idea and in February 2011 I began the next phase of my expansion and growth: Intuitive Mandala Art Readings.

Since my mandala journey began in 1999, my art expanded from symmetrical mandalas to asymmetrical , hyperbolic tessellations, and now Tibetan Mandala designs. The mandalas for coloring expanded from individual mandala prints to 20 mandala coloring books.

My Intuitive Mandala Art Readings started as a simple image in my mind with general insights to help people move forward with their lives. They now come in as Guided Visualizations, with insights and guidance that often transcend time, space and dimensions, coming in from Higher Vibrational realms, offering plans of action, energy clearings, and life coaching.

Subscribe to the
Mandala Musings Newsletter
receive a free mandala to color! 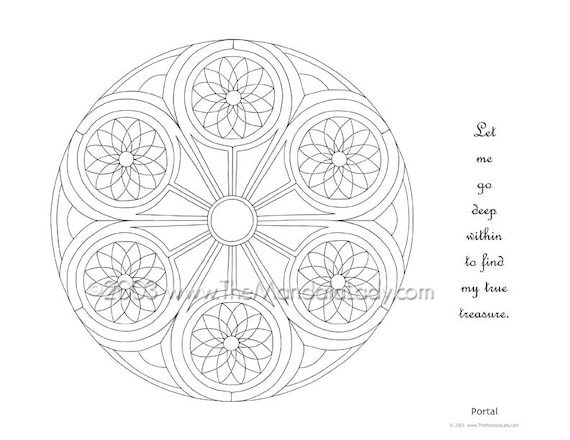